Chef Fernando Ruiz: From a troubled past to the kitchen by way of culinary school and beating Bobby Flay! 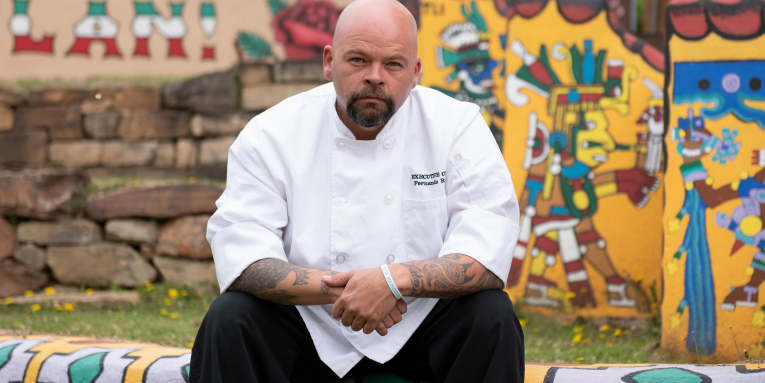 This culinary genius overcame the odds by leaving a life of gangs, drugs, arms trafficking and prison to becoming a highly sought after chef and media darling. He is now the Executive Chef at The Lodge and Ranch at Chama Land & Cattle Company.

Summary: Chef Fernando Ruiz is living proof that no matter what your circumstances are in life, everyone has the ability to change.  Better choices, hard work and finding a passion in life can ultimately lead to success and happiness no matter what the odds.

Chef Fernando Ruiz now holds the distinction of “beating Bobby Flay”.  Ruiz recently competed against the legendary chef on the popular Food Network show BEAT BOBBY FLAY and to the delight of culinary fans everywhere, took home the top honor with his chiles en nogada dish.  The New Mexico based chef gives all the credit to his wife, Michelle Romero who encourages him and pushes him to be his very best everyday.  Ruiz says of his wife, “It is true that behind every great man is an even greater woman.”

No stranger to the Food Network, Ruiz first gained notoriety by winning the competition show GUYS GROCERY GAMES.  A year later, with more support and encouragement from his amazing wife, he returned to the popular cable network to compete on yet another show, CHOPPED.  Once again, he did not disappoint by winning this contest too.

Ruiz was born in Phoenix, Arizona. His early years were spent in Phoenix and on the family ranch in Mexico.  At the age of 13, he started running with a gang, trafficking weapons and drugs. At the age of 16 he got his first taste of “reality” when he was arrested for possession of weapons and drugs.  At eighteen he got “busted” again. Ruiz spent his 20th and 21st birthdays in jail. It was while incarcerated that he earned his G.E.D.  Upon release, he went straight into culinary school, graduating in 1999.

Fernando worked in Vail, Colorado for 4 years before moving to New Mexico 18 years ago. It was in New Mexico that Fernando met the love of his life, Romero. They moved in together after knowing each other for only 2 days. Fernando had given up on cooking at this point, but Romero, seeing something in him that others did not, encouraged him to return to the culinary arts.

Chef Fernando Ruiz currently resides in Chama, New Mexico with Michelle Romero and their three children. He continues to be the Executive Chef of the Lodge at Chama.

People also listened to this: Private equity investor and figurative sculptor, George Petrides and his case for “dual careers”