Some Things Are Impossible To Take-Away Even In China 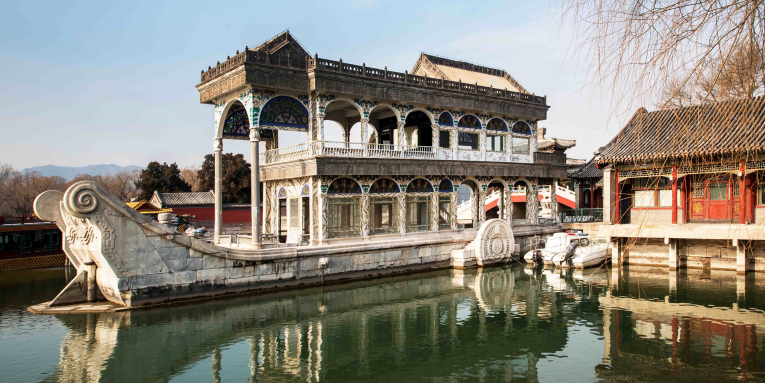 Mike Emery was the official photographer on board the Aqua Marine when in 1980 it became the first cruise ship to bring American tourists to China post Chairman Mao.

He used the opportunity to capture on film a moment in time in the life of China that has become recognized as a unique record of the contemporary society. His acclaimed photo-art collection has been published under the title of ‘China’s Children’.

He developed a great affinity with the Chinese he met and was especially taken by the contentment and good humour of people who generally had no phones, no electricity, no running water and relied on bikes and bendy old buses to get around.

Mao caps and suits were the dominant and possibly only fashion choice for both men and women.

The vast majority of people had never seen a camera before the one Mike pointed at them. The photos he took of the elderly could well have been their only appearance on film.

Thirty-nine years later Mike has just finished retracing his China steps. It is difficult to determine whether he was astounded more by the phenomenal changes that had taken place or by the fact that some aspects of life hadn’t changed at all.

In 1980 there was one hotel in Beijing that accommodated ‘Westerners’. Today there are over eleven thousand.

There is hardly a Mao cap or suit in sight. They have been superseded by the very latest fashions from Dior, Zampatti, Ralph Lauren and Prada. Shopping in Beijing is up there with Fifth Avenue and Knightsbridge.

Cameras are no longer a novelty around the streets of Beijing but Mike was gratified to find that public fascination with his second major photographic project in China was in no way diminished.

Today wall-to-wall skyscrapers soar where humble shacks once stood and Beijing’s six ring roads make it infinitely easier to find your way around.

Mike was beginning to fear that the Beijing he felt such an affinity for in 1980 had been modernized to the point of extinction but as soon as he saw the Marble Boat again he was reassured.

This Lakeside Pavilion in the grounds of the Summer Palace has a timeless beauty and serenity that has endured since 1755 and he was relieved to discover that the intervening thirty-nine years since his last visit had made not one modicum of difference.

He found himself still in awe of the Temple of Heaven, the masterpiece among Chinese sacrificial buildings, and he deemed it once again an unparalleled privilege to visit the Forbidden City especially as it was off limits to commoners for so many centuries.

Ultimately it was the resilient character of the Chinese people that reassured Mike that the China he fell in love with had endured. Despite the high incidence of BMWs, fashion labels, iphones and Kate Spades he was reassured to find their natural uncomplicated charm had not been compromised by the tsunami of western civilization. They posed just as enthusiastically for his second photo-art collection of Chinese life and times as they did thirty-nine years ago for the first.

It seems that plus ça change ne change is just as valid in China as anywhere else.