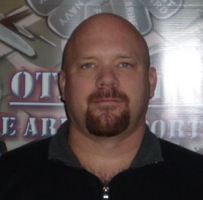 Mark Woods grew up in Memphis, Tennessee, and out of a genuine sense of patriotism and love for his country, decided to join the military. With a desire to travel, Mark chose the Navy as the ideal way to serve and see the world. He served 21 years, retiring in 2008.

It was September 2001, when Mark started to chart the course of creating TROOP AID (TM)/Operation Troop Aid (OTA), Inc. Having been on deployment during the horrific attacks of 9-11, he and his shipmates watched as the second plane hit the World Trade Center. They were on station and ready for any action the president required of them.

Previously during that deployment, Mark was the coordinator and escort for an onboard concert by Chad Brock, a CMA recording artist. After the events of 9-11, he received an e-mail from the military concert coordinators that Garth Brooks wanted to do a concert onboard and televise it nationwide. Mark was again assigned to work as the assistant coordinator. He toured Garth around the ship and met all of his entourage. This experience was extremely enlightening, and Garth inspired Mark to use music and entertainment initiatives for charity.

Upon transferring from that command to shore duty in 2003, Mark began to coordinate benefits for Toys for Tots and Military Appreciation. One night Mark was awakened by a vivid dream and immediately searched the Internet for the name “OPERATION TROOP AID.” Finding it nowhere, he retained a lawyer to become incorporated and submitted the IRS Non-Profit 501(c)(3) paperwork, to which he was granted incorporation and charity status in the state of Tennessee and was then awarded IRS 501(c)(3) status. He later transferred to Virginia and continued the TROOP AID (TM) mission.

Mark’s dream is to turn OTA into the “Premier Care Package and Bill Assistance Charity” for U.S. Troops, by using major concert promotions and entertainment initiatives and branch TROOP AID (TM) out all over the country. He has worked tirelessly and assembled all the right players and is now seeking corporate sponsors. The mission of OTA is to make a positive difference and inspire deployed U.S. service members by letting them know America stands with them. Headed up by Woods, Operation Troop Aid provides care packages and bill assistance with revenue generated through professional concert promotions, entertainment initiatives and public financial generosity. To date, the organization has sent care packages valued at a total of more than $1 million to U.S. service men and women.