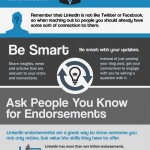 Facebook and Twitter might get the lion’s share of the press compared to other forms of social media, but when it comes to professional networking, LinkedIn is the uncontested champion. The site’s more than 300 million members tend to leave the funny cat videos and goofy eCards to other, more informal sites, preferring to focus on expanding their professional networks and building their brands.

In fact, a 2013 survey by the Wall Street Journal found that over forty percent of small businesses regard LinkedIn as having the most potential for helping their business grow. And a study conducted in 2012 by the University of Massachusetts-Dartmouth’s Center for Marketing Research, found that 81% of Inc. 500 companies used LinkedIn for social media, as compared to 74% and 64% for Facebook and Twitter, respectively.

Clearly, LinkedIn has plenty of opportunities available, and no matter how many connections you already have, it’s easier than you might think to grow your network.

One of the easiest ways to stand out on LinkedIn is simply to be active. Nearly half of the site’s members spend two hours or fewer on the site each week. So simply interacting with other users is a great way to let them know that you’re invested in the site and ready to connect. Sending at least one invitation to connect each day takes only a moment, but can have a big impact, provided you reach out to someone who’s likely to share your interest in building a professional relationship. (And your invitation is in the proper format.)

Sharing useful, high-quality content is another way to encourage interactions. LinkedIn began opening its content publishing platform, formerly limited to experts known as Influencers, to all users in early 2014. Publishing original content—including presentations, images, articles, etc.—is a fantastic opportunity to build your authority and interact with your audience.

Making the most of LinkedIn connections for your business doesn’t have to be a chore. By taking the time to review your options, seek out those likely to be interested in, and benefit from, a new relationship, taking advantage of tools like groups and content publishing, and staying active in discussions, you can start to expand your professional network and grow your business.