Stranger Things is Netflix’s Celebration of All Things Retro-Fashion, Music and Geopolitics 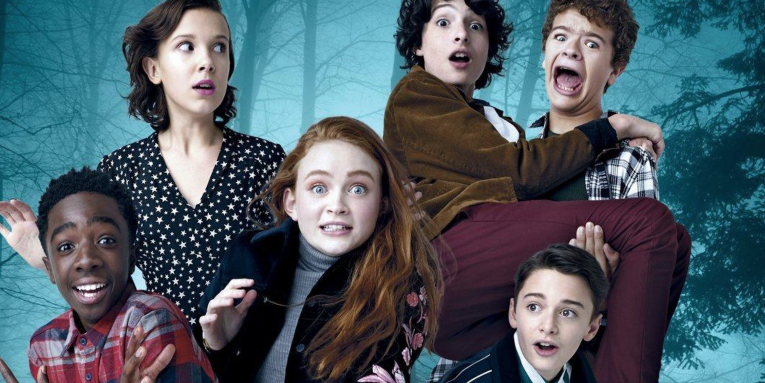 It was the middle of 2016, sometime in July, when a certain show took the World by storm. The Duffer Brothers came up with an idea that did not sound doable by producers of some of the biggest production houses. None seemed to think that a concept like ‘this’ could go on to become a worldwide phenomenon and hit the audience right in their feels. Now, three years and three seasons later, all we loyal fans (which supposedly comprises of a major portion of the World’s population), are left wondering about how 15 networks (before Netflix happened) could reject a show that has assumed the status of a classic! But probably it was for the best. There could not have been a better platform for the show than Netflix.

There has been no turning back for the show, once a certain Will Buyers from Hawkins went missing. But fret not, if you do not get the reference. All our entertainment news shall keep you updated.

Thus, if you have never heard of the show before, here are a few things that you should know.

It Is Stranger In Hawkins, Indiana:

Set amidst the backdrop of Hawkins, a fictional small town in Indiana, sometime in the 80s, there are a few kids and teenagers going about their lives with their somewhat dysfunctional families. Meet Will Buyers, Dustin Henderson, Lucas Sinclair and Mike Wheeler- four best friends who love spending time playing D&D and dressing up as characters from The Ghostbusters for Halloween. They are these tiny people, within the age group of 9 to 11 and utterly oblivious of the fact that something wicked comes their ways.

Meet another young kid (or superhuman, if you will), Eleven- a strange product of strange lab experiments! She is on the run when we first meet her, from something sinister that brews every night in the laboratory of Hawkins. Few episodes down the line, we see how the lives of these four young boys and this weird kid with superpowers intertwine in a creepy juxtaposition. Is Eleven a saviour, is she the villain or is she the victim of a mysterious power play that cooks right in the heart of this ostensibly naïve town? Was she always an abject, or was she bent and broken to suit the ulterior motives of some larger power at work? I shall let you figure that out for yourself.

Of Mind Flayers and Demogorgons- A Show That Is Reminiscent Of the 80s:

If the plotline does not seem to pique your interest, maybe its era will. Stranger Things is a show that will bring back memories from the 80s. Fashion, music or pop culture references- you name it, and Stranger Things shall not disappoint you. It is a show that strikes the right chords for those who have lived in that era and for those who are far too captivated by the old world charm.

Stranger Things has become some sort of an ideology- fashion, music, romance and everything in between. It recreates the 80s in a microscopic representation and leaves you wanting for more. But there is only so much that a web series can do, and this show has done more than any other could ever pull off! The 80s are a bygone era, and Stranger Things has been bringing retro back like none other. The trend that started with the first season continues to stay strong even in its latest franchise. It rather dials up the game a few notches higher with Madonna’s ‘Material Girl’ playing in the background when Max and El go out shopping, and when Dustin and his girlfriend (resembling ‘Phoebe Cates’) break into the romantic retro-pop ‘Neverending Story’ in the midst of a hullabaloo. Cracking open the security gates to that strange Russian experiment with Planck’s constant can wait, but definitely not a vintage romantic duet.

The third season proves as the most vital in the show’s total runtime so far. Some bad hairdo, bright colours on cute shorts, ‘bitchin’’ eye shadow and rad video games, make up the World of this hauntingly beautiful series to ever stream on Netflix. You see the all-time hit ‘Back to The Future’ hit the screens in a newly built shopping mall, Starcourt, which itself was a new concept back in the 80s. The disastrous ‘New Coke’ keeps making silent appearances while fresh hormones surge through the adolescents. But Stranger Things is not just nostalgic due to its music and fashion. It serves as a recurrent reminder of the fearful geopolitics, involving the Russians. It is a reminder of how the great American Dream and several fourth of Julys in the 80s had been marred by the blood-curdling phase of the Cold War. When season 3 of Stranger Things first open, we see that it is 1985 and something wicked is taking birth in a laboratory, with Russians hovering around. Who is to say that the next season would not draw connections to that fateful night of April 26, 1986 when a RBMK Nuclear Reactor at Chernobyl burst open and spread shockwaves of terror all over the World? Who is to say that Stranger Things Season 4 would not revolve around the most enormous humanmade disaster to have ever occurred on the surface of the planet?

Conclusion? In The Heart of Indianapolis, Something is Always Cooking:

Give it an episode or two, and see how chaos breaks into Hawkins. The Demodogs are on the loose, and the Mind Flayer is looking for new hosts. It is so bleak and murky that you would be immediately transported to Stephen Speilberg’s E.T, the Extra-Terrestrial! You have rebellious adolescents flaunting sneakers and frocks, and clicking pictures at photo booths while also fighting the World that has descended into madness. You have frequent blasts from the past with Cutting Crew’s ‘Just Died in Your Arms Tonight’ playing in the background, while children and adults alike navigate their wide spectrum of relationships. In a nutshell, Stranger Things is Netflix’s celebration of all things retro-fashion, music and geopolitics!