Interview with CEO of Pop17 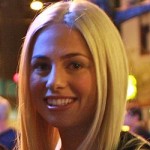 Sarah Marie Austin is an American video blogger, social media advisor, and online lifecaster. Austin interviews tech-oriented developers and Internet personalities. The New York Times has referred to her as a central figure in the emerging subculture of New York techie night life, and has described her as “the founder of Pop17, a web site posting her video interviews with tech-world celebrities”.

Eric Dye: So what inspired the idea and creation of Pop17?

Sarah Austin: Well, I was looking at a bunch of other web shows after reading the blog called Tech Crunch and I saw a news report about a show called WebbAlert and it was about tech. I wanted to do a tech show about real life tech and I had done tech show before and I wanted to get a different angle to it and so that’s why it was suggested to name it Pop17 and do it about celebrities in tech and the internet world. So, I went to Digg.com and saw a story about popular numbers and I read this story about how 17 is the most rememorable number and so I thought – WOW, everyones going to remember that, it’s such a cool number – so I named it Pop17 just for that.

Eric Dye: What is a regular day for Sarah Austin? Let me give you my perspective. I see obviously you are tapped into the latest technology, social media front, you’ve got a good web presence, you seem to be travelling a lot, at events a lot tied up with Pop17 etc., what is an average day coming from Sarah Austin?

Sarah Austin: I do work at a desk a lot. I mean, I am editing videos, doing business but I do get to go to the studio & film things and that’s usually really fun. I would say that lately it has been a lot more in studio filming than out and about travelling around to conferences and stuff but the average day which would be me getting up, going to work out for a little bit, going to work like everyone else, getting off work and I actually getting my M.B.A. right now at night time and on the weekends. So pretty much every night & weekend I also spend in class.

Eric Dye: So, you are very, very busy. What is the most exciting thing that has happened thus far with Pop17?

Sarah Austin: It was pretty cool when YouTube had the Life in a Day contest and I was able to submit with a partner, film maker, friend of mine and we did some Pop17…we are actually currently working on a little series with Pixar talking about how they create a lot of the characters for their shows like Toy Story 3 and Finding Nemo. I would say the coolest thing was interviewing Richard Branson (CEO of Virgin) about his space shuttle galactic.

Eric Dye: Where would you like to see Pop17 even 2 years from now? If you have thought that far in advance and you probably have…

Sarah Austin: I have. I would like to see double or 3 times the amount of women who are watching the show. I would like to see a lot more ladies coming to our site and just having a memorable experience and something that they would want to share with their girlfriends.

Eric Dye: Is there any one person that comes to mind that would have helped inspire you to be who you are today or who you want to become?

Sarah Austin: I would say so. There are just so many great mentors and leaders out there but the one person in business that I look to is Oprah Winfrey.