How Not to Use Twitter: Learn from Kenneth Cole

For all those who needed an illustration of how a business shouldn’t use Twitter, Kenneth Cole kindly provided it this week by using the current unrest in Egypt as a promotional tool.

“Millions are in uproar in #Cairo,” read the original tweet from Thursday morning. “Rumor is they heard our new spring collection is now available online at http://bit.ly/KCairo.”

Widespread uproar was the result, all right, but not as a result of any spring collection. Such was the magnitude of the outcry at Cole’s insensitivity, in fact, that the company hastily removed the tweet that same day and issued two retractions instead.

“Re Egypt tweet: we weren’t intending to make light of a serious situation,” read the first. “We understand the sensitivity of this historic moment -KC”

A second, posted on Facebook soon afterward, read as follows: 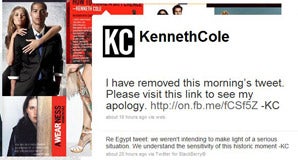 “I apologize to everyone who was offended by my insensitive tweet about the situation in Egypt. I’ve dedicated my life to raising awareness about serious social issues, and in hindsight my attempt at humor regarding a nation liberating themselves against oppression was poorly timed and absolutely inappropriate.”

Cole’s apology didn’t prevent the creation of a satirical Twitter account inspired by the gaffe, however, and it’s now filled with mock tweets such as, “South Africans won’t be able to tear APARTheid my new knits — they’re just that strong!”